Solving Problems, One at a Time 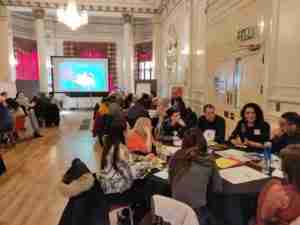 The members of the citizens’ assembly are selected using a democratic lottery. The selection is based on some means of uniquely identifying individuals in the pool of possible people. Voter registration rolls and drivers license data are examples of pools, and each has advantages and drawbacks. Some countries do not have accurate information on citizens and, therefore, a pool can not easily be identified.

A process to ensure that those selected are representative of the pool is often employed. The process, called stratification, can use identified traits like gender, ethnicity, political affiliation and socioeconomic data. Stratification can help ensure that the assembly is a cross-section of the pool. Some feel that stratification gives too much power to those designing the citizens’ assembly and prefer that it not be used.

I will never be the same. The experience of being a panelist in a citizen assembly process changed me – and changed my perspective on how the world could work. More…
by Marion Sharp

Citizens’ assemblies reach decisions through deliberation, which provides for the education of participants. The assembly considers the views, information and arguments of stakeholders and experts on the subject, engages in collaborative discussions, and ultimately produce a result that is representative of the informed public interest. Deliberation removes coalitions, political parties and money, and replaces them with a voice of reason.

A citizens’ assembly is often given a charge or agenda from a political body. How far an assembly can move outside the parameters set by the agenda are subject to debate among professionals. The political body setting an agenda often feels that the assembly cannot move beyond the agenda. However, the assembly may, through the process of deliberation, find what it considers reasonable paths of consideration that stray from the agenda.

Citizens’ assemblies are intended to instill trust in the process itself and in the outcomes it produces. That trust comes from who is in the assembly – a cross section of the people – and how they reach their decision – deliberation.

An advantage of a citizens’ assembly is its ability to give a voice to the people. It can speak for the pool from which it was drawn. Factors like age, gender, ethnicity and career of members of the assembly help the public identify with them. The inclusive, diverse and representative nature of citizens’ assemblies comes from the lottery selection process, and contributes to it being the voice of the people. An elected body, on the other hand, is often a exclusive and oligarchic group.

Some critics feel that, by the very nature of lottery selection, the average citizen is not as competent as more educated people to make decisions. The briefing materials and choice of experts supplied to an assembly may not be accurate and balanced. The costs of a citizens’ assembly are much greater than measuring the public will through surveys and focus groups.

Adapted from the Sortition Foundation.

I will never be the same.

The experience of being a panelist in a citizen assembly (in this case, a Citizens Initiative Review) process changed me – and changed my perspective on how the world could work.

I went into this experience . . . curious, but definitely skeptical. I had recently attended a large one-day event that had a similar intent as a citizen assembly. It was interesting . . . but there were several important elements that didn’t build my trust and confidence in the event and the process. And for one, I do think it requires more than one day.

So when I arrived in Salem, Oregon to participate in a citizens assembly examining 2010 Ballot Measure 73, Oregon Minimum Criminal Sentence Increase – I was once again curious, but even more cautious and skeptical.

Here is the statement that we produced at the end of the week that was published in the 2010 Voters Pamphlet in Oregon. I can tell you that this accurately reflects ALL of our work and our positions. We reviewed every single note that was taken, every summary of what was said, AND we were directed to question anything that did not seem to reflect what any one of us (and all of us collectively) had said. This was understandably missing in the one-day event – our group notes disappeared to a panel of event staff who summarized and transformed what each group contributed to create a final document. There was no ability to determine what happened to our group’s contribution and no opportunity to raise questions and concerns about what was produced.

This is part of the dilemma of a one-day event, there’s just not enough time – and the citizens assembly was a full week. A huge and relevant difference. With a several day event, there is time to build relationships (aka trust) and to more completely understand the many issues involved.

I would note this is in contrast to picking up my Voter’s Pamphlet, skimming it quickly and filling out my ballot.

Here is one key ‘ingredient’ for me of the deliberative process – one of many. We were introduced to the idea of ‘stay in listening/learning mode’. So as more and more information was introduced over the week, we were reminded frequently to keep listening and keep learning. Here is one example of the impact of that for me – occurring during the first few hours of the week.

That first morning we were working through an example in order to practice the process. In my group we were discussing the example and the person next to me began talking. Very quickly I could tell that we were on very different pages politically and my ‘natural’ reaction kicked in . . . . including “OMG, I’m not going to like anything this person says and if this is what the discussions are going to be like, this is not going to be fun.” But then I remembered the ‘stay in listening/learning mode’ . . . and so I kept listening. And a few minutes later, I was stunned.

I Agreed with him.

How is that possible? I guarantee in ‘normal’ circumstances I would have stopped listening, filled my head with reactions and waited for him to finish. And avoided him the rest of the week. I would never have heard the part where I agreed with him.

Instead we became friends and we were standing next to each other at the news conference at the end of our deliberation when they took our group picture in front of the state capitol.

There were many more amazing moments during this week-long process. But that one really touched my heart and forever changed me. And I really think these kinds of experiences, engaged in often, could change our world.